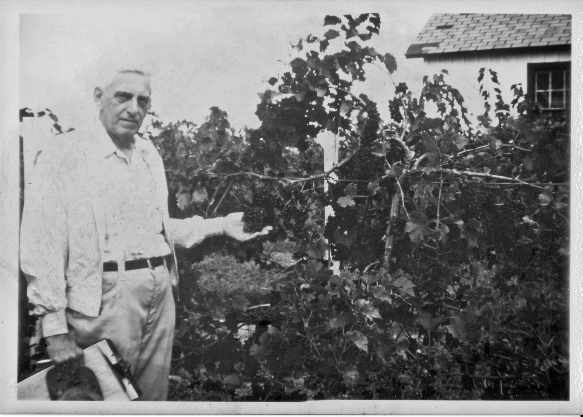 In 1865, John H. Bardenheier came to the United States from Oberlahnstein, Germany, where as an employee of a liquor distributor, he became versed in the distribution end of the wine & liquor business. In 1873, he founded The John Bardenheier Wine and Liquor Company, later known as Bardenheier Wine Cellars.  The original Site of the company was 212 Market Street in St. Louis, MO, behind the Old Cathedral building, approximately under the south leg of the Gateway Arch.

Bardenheier was legislated out of business on Jan 16, 1919 and forced to close its doors Jan 16, 1920 by The Volstead Act (prohibition). On December 5th 1933, when the repeal of prohibition became effective, Joseph A Bardenheier Sr., son of the founder, reopened the doors for business. The business, was reopened on Market Street and later moved to 2nd street in St. Louis.  Upon the death of Joseph in 1962, his sons, John, George, Carl and Joe continued the family business.   In 1955, the winery moved to 1019 Skinker Pkwy.

At their peak, Bardenheier’s was one of the oldest and largest family owned and operated wineries in the United States, producing approximately 1.5 million gallons of wine per year. They had about 150 prime distributors in 39 states, with a total sales force of nearly 1300 Representatives and Brokers. The very successful winery was sold in 1983 and continued to operate under new ownership until about 10 years later when it was ultimately closed.

As a result of their many worldwide contacts, Joseph’s son, John Bardenheier and his son John Bardenheier Jr., continued to work in the industry selling bulk wines and Sacramental wines and also producing the first ever “Wine in a Glass”.

In 2004, Wayne and Kim Bardenheier Evans, daughter of John E Bardenheier Jr., reacquired the family name and opened a small winery in Richwoods, Missouri. Initially selling Sacramental Wines to a national church supplier and wine in barrels and tank trucks, to Food and Pharmaceutical companies as well as other wineries, in the Southwest, Midwest, Northern States and in the Southeast. Bardenheier Wine Cellars introduced their own production again at retail in 2006. Wayne Evans is the winemaker and has created a number of popular wines. Old Fashion Concord Grape, an old Bardenheier favorite “Rosie O’Grady”, Strawberry Wine, two delightful Table Wines in Red and White, a unique soft red table wine under the banner “Sunset Serenade”, which has already won him a Bronze Medal in the International Wine Competition circuit, a wonderfully fruity white wine called “Whispering Falls”, A unique sweet Blush Called “Sommer Rose”, and several amazingly popular fruit wines.